The NSW Budget 2019-20 is delivering on the Government’s election commitments – building a better NSW with record infrastructure investment, support for our drought-affected communities, tax cuts and a boost to the cost of living.

In an Australian first, net debt is negative for a fourth consecutive year with the Government’s record infrastructure pipeline over two terms boosting economic activity and contributing to the continued growth in the State’s net worth.

The NSW Government has retained its triple-A credit rating, with the Treasurer commenting: “Our financial strength means we can do more to help those most in need, while delivering on our commitments and continuing to transform our state.”

Education is front and centre, with funding for early childhood, more teachers, and $500 million for better facilities in non-government schools.

An unprecedented boost to frontline health services will deliver better quality healthcare, funding an historic 8,300 additional nurses, midwives, doctors and medical and support staff, many of which will be located in regional NSW.

A new record $55.6 billion budget for road and transport projects propels the state’s overall infrastructure investment to $93 billion, with funding for major projects already underway including Sydney Metro City and Southwest and breaking ground on Sydney Metro West next year.

To help break the cycle of disadvantage, the Budget funds a new Disability and Ageing Commissioner as well as $55 million for new infrastructure in our most disadvantaged remote indigenous communities.

To support the Government’s goal of creating 250,000 more jobs and strengthen our economy, this Budget continues to cut payroll tax allowing businesses to employ more people and increase wages. A new NSW Economic Blueprint has also been promised to identify the jobs, industries and opportunities where our future prosperity lies.

This year, the NSW Budget 2019-20 website continues to deliver citizen-friendly features that clearly illustrate where the money comes from, where it goes, and what to expect from outcome budgeting – the new way of measuring whether NSW taxpayers are getting the most for their money. 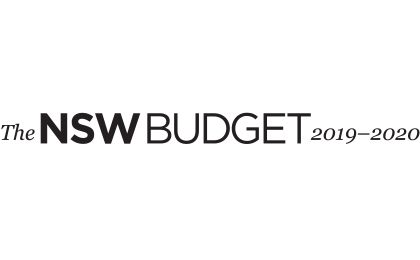